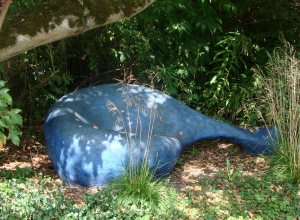 Several years ago I thought a street-side bench would transform the life and traffic on Dosch Road. If it were beautiful enough, people would go out of their way to visit it, sit awhile, maybe chat. Dog walkers would rest their dogs. Kids would sit and eat popsicles.  Tourist buses would climb the hill to gawk. Indy bands would show up to make their promo photos.

It took the two of us most of one weekend to pour and finish the concrete. I take no credit for any of it-I just did the grunt work. Concrete is heavy and grunt is a literal transcription of what I did. Leslie did even more grunting plus all the meticulous finishing. She was out late into the evening, working by lamplight to get it just so before the concrete set up. I was inside, meticulously finishing a sandwich.

Leslie loves blue and the bench needed blue. But we didn’t know how to do it. The integral concrete stains would have just vaguely colored it. We didn’t want vague, we wanted True Blue.  Since the two of us have 6 kids altogether, we found some other things to do for a few years and the bench languished, gray and unused.

Until this summer. Thanks to the folks at Ecohaus I got some beautiful blue concrete stain and finished  off the bench as a surprise for Leslie. Now it really looks like sculpture. It is the best thing on Dosch Road. 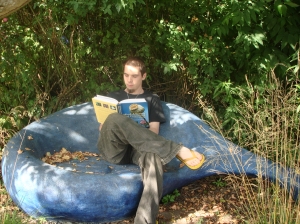 § One Response to Big Blue Bench

You are currently reading Big Blue Bench at Piano Connections: The Studio of Megan Hughes.